The Many Impacts Of Cordyceps 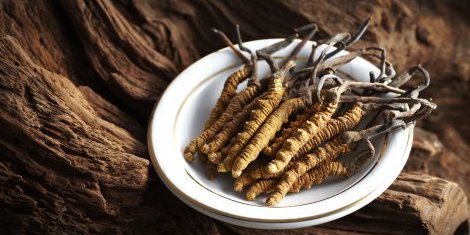 Cordyceps, the famous medicinal widely known in Traditional Chinese Medicine for boosting energy, has up to 400 related species with many variations used for a wide variety of healthcare improvement purposes and as a food supplement.

Cordyceps is used as an anti-oxidant against cell damage. It works against liver disorders, and has anti-tumor mechanisms and combats sexual problems. It is used to replenish the kidneys and sooth the lungs, works with renal dysfunction, and arrhythmia problems.  It has anti-inflammatory strength.

This rare combination of caterpillar and fungus was identified for hundreds of years as a tonic. The unusual fungus has, yes, unusual beginnings. Infected caterpillars with certain spores bury themselves and then die. The resulting fungus then emerges resembling a stringy orange.

To date hundreds of cordyceps-related species have been found worldwide based on the fungus and or insect host. These fungi have become a very important topic because of their potent pharmaceutical uses and huge global markets. Fungi form the second largest group after inspects. In recent years research on them have received increased attention for their nutritional value as well.

Several mechanisms contribute to the antitumor effect of cordyceps, such as direct cytotoxicity, immunopotentiation, apoptosis, selective inhibition of ribonucleic acid and protein synthesis. Nucleosides, compounds found in DNA or RNA, are one of the major ingredients in cordyceps.

One of the most well-known of the cordyceps is C. sinensis, which grows on the larvae of the caterpillar. The parasite complex of fungus and caterpillar is found in soil of a prairie at elevations of thousands of feet. C. sinensis is sweet in taste.

A main effect of C. sinensis is enriching the “lung yin and yang,” which and treating chronic cough and wheezing. It also has an antibacterial functions and lowers blood pressure. Its anti-oxidation effect is also cherished, fighting chemical reactions revolving around free radicals that can damage cells.

An interesting element of C. sinensis, sometimes called DongChongXiaCao (winter worm, summer grass) in Chinese, is that its impact can be relevant from single active ingredients or combinations of them.

Sinensis is considered rare and prized in the marketplace, and there have been many other natural substitutes as commercial products and in medicines and dietary supplements. C. sinensis and another cordyceps species, c. militaris are definitely two distinct species but look similar and have similar effects. Both have similar bio-active compounds

Various human and animal studies have shown effects for both:

Various other cordyceps species also have potential impacts for health improvements based on animal and other studies, including:

Indeed, when it comes to cordyceps, it is a fungus of many layers.