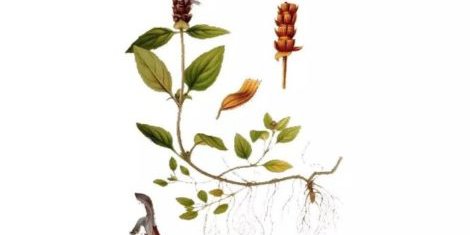 All-Heal, Self-Heal and Woundwort arethe common names for this low maintenance,, low-growing perennial herb.Prunella can growall over the world, like in Europe, Asia and the United States. Depending on the region grown, Prunella plants bloom from May through August with lavender or white flowers.The whole plant is witheredby the end of the summer, so the Chinese name‘Xia Ku Cao’(in Chinese pinyin) reflects that same attribute..Usually the dried ears of Prunella are used as medicinal herbs and collected in the summer when the ears present a brownish-red color. Prunella was first recorded in Shen nong ben cao jing (Shennong’s classic of Materia medica, written between Qin and Han Dynasty221BC~220 AD).

The key characteristics of Prunella are that it cools liver fire, disperses clumps and benefits the eyes.

Benefits
The benefits Prunella vulgaris were mysterious for a time, while medicinal studies indicate that the legends may truly support scientific evidence.

Just as it is named, the “Self-Heal herb” is applied externally as a healing herb in minor ailments, such as bruises, sprains, cuts, mouth sores (ulcer, mouth wash), dry eyes (used as an eye wash). As a well?known Chinese folk medicinal herb with properties of heat and detoxification, Prunella is traditionally used to treat poor vision, blood stasis, edema, infection, mammary gland hyperplasia, hypertension, and tumors.

Extensive studies have been done in the research of Prunella and scientists have found that Prunella has anti-viral properties, history of lowering blood sugar, decreasing blood pressure,anti-cancerproperties,etc.

Antiviral Properties
Prunella has been used for centuries as a medicinal herb in the treatment of infectious diseases including fevers, hepatitis, acute mastitis (infection of the mammary gland), wound infections, and carbuncles.

Researchers have found that Prunella has powerful antiviral effects against herpes and has been successfully used clinically to control gingivitis and to treat cold sores caused by herpes infections.Laboratory studies showed its potential effectiveness against HIV viruses, according to the journal’s report. Prunella may be used clinically as an alternative choice in prevention and treatment of diseases caused by herpes or the HIV virus.

Blood Sugar Lowering Effects
Prunella vulgaris significantly reduced high blood glucose in experimental diabetic mice according to a scientific report in the 2007 Asian Pacific Journal of Clinical Nutrition.Prunella provided an even greater effect when co-administered with Glibenclamide (a popularly used anti-diabetic drug by doctors). Combinational use of Prunella extract and Glibenclamide enhanced the action of the glibenclamide, resulting in a more effective and longer-lasting blood glucose inhibitor because they lower blood sugar by a different pathway.

Effects of Prunella onhigh blood pressure
Centers for Disease Control reported about 1 of 3 U.S. adults, or about 70 million people have high blood pressure(CDC, 2013).This common condition increases the risk for heart disease and stroke, two of the leading causes of death for Americans.

Prunella vulgaris has been used in China and other Asian countries for the treatment and prevention of high blood pressure especially caused by hyperactivity of liver, supposedly interfering with the balance of Ying & Yang within our bodies.Yin and Yang are two complementary principles of Chinese philosophy: Yin is negative, dark, and feminine while Yang is positive, bright, and masculine. Their interaction is thought to maintain the harmony of the universe. Scientists have found that Prunella significantly reduced the blood pressure in experimental hypertensive animal models according to a scientific report published in 2012in the American Journal of Chinese Medicine. Mice were fed with an aqueous extract of Prunella for eight weeks and their blood glucose and systolic blood pressure were markedly lower compared to the placebo control animal who was not fed Prunella. This explained, with Prunella combined with other herbs has been successfully used clinically in the treatment of hypertension in China.

Anti-cancer activity of Prunella
Prunella vulgaris has been long used by Chinese herbalists in tumor treatment like goiter, and mammary gland lumps. Recent scientific studies indicate that Prunella extract inhibits the growth of colon carcinoma cells. The scientist reported in a peer-reviewed journal ONCOLOGY LETTERS (2013) that the ethanol extract of Prunella was observed to inhibit cultured human colon carcinoma cells (HT?29)viability and survival in a dose? and time?dependent manner. This research result indicated the potential health benefits for the treatment of cancer patients as a complementary choice. This is the solid evidence needed for its application for clinical cancer therapy.

Dosage and toxicity
10-15 grams is generally the dosage in decoction, in pill form, powder form, powder or extract. Dosage should be doubled if used alone. At low-to-moderate doses, Prunella has a few side effects. Experiments show that at 10g/kg, Prunella does not cause death to mice. Subacute toxicity tests on rats and dogs indicate that the herb does not harm the functions of the liver, kidney, or other major organs. Ames test shows that the herb does not cause mutation.

Precaution
There is not enough evidence showing Prunella is safe for women who are pregnant, breastfeeding or nursing. Talk to your doctor before taking Prunella vulgaris.