Be Careful Of Some Poisonous Plants 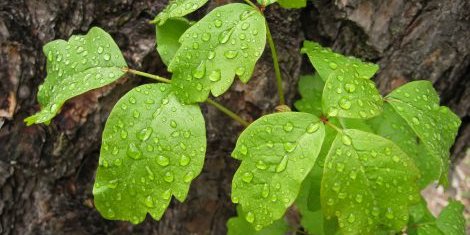 Take a stroll in the autumn, and see plants outside, along a trail, in the woods, perhaps near streams.

While most are wonderful, even beautiful with their flowering and rainbow of colors, some should not be touched, or definitely not to be eaten, or even have skin contact.

There are hundreds, perhaps thousands of poisonous plants.  There are common native plants that cause allergic reactions, such as poison ivy, poison oak and poison sumac. With these plants, the major problem is touching their sap oil.

There are plants that cause more serious illnesses, and are even fatal. People should always be on the look out for them. They could include plants such as the seemingly wonderful oleander, which is common in the west and southwest, and has been used as a decorative flower in backyards, but can be extremely poisonous.

Those that can be concerned include outdoor workers, farmers, foresters, landscapers and groundskeepers.

Whatever the level of poison, it is important to supervise children to be careful what to touch and eat.

The sap is in the root, stem, leaves and fruit of these plants. If it gets on your skin, it causes a blistering skin rash. The rash may range from mild to severe, depending how much gets on your skin, and your particular sensitivity. Problems can also happen if sap gets into your ears, and can result in throat and respiratory system.

There’s a saying “leaves of three let them be” and that certainly applies to poison ivy and oak, although their form may vary in season and location. But poison sumac is a woody shrub with clusters of more than a dozen leaves. If you come into contact with these plants, wash your skin and clothing right away. If you develop a rash, ask your pharmacist about over-the-counter medication.

Some plants are more poisonous than others. What follows are among the most deadliest:

This plant, known as cicuta maculate, has an ancient reputation as the poison that killed Greek philosopher Socrates. The perennial has little white flowers, and grows large, even up to eight feet, and around swamps. Often, it is confused with parsnips or celery. But ingesting a small amount of the plant can cause wide and lasting problems. It is widely considered as the most poisonous plant in North America, with a deadly toxin known as cicutoxin. Its victims suffer from vomiting, various pains and even unconsciousness and death.

It has been named one of the most deadly trees on the planet. It is also called the “little apple of death.” Indeed, it has a fruit and resembles an apple, but it is poisonous.  It is a flowering plant in the spurge family and native to tropical southern North America and northern South America. Unfortunately, it appears sweet and tasty when first bitten into, but it almost immediately results in throat swelling, and burning of the mouth. It can also cause internal bleeding and shock.

The flowering shrub, neruium oleander, is widespread in the U.S. and can be seen in backyards, and parks and near schools.  Known for its swirling and innocent looking pink flowers, it is a bitter and poisonous plant and widely planted in areas along parks and schools. Its leaves, fruit and flowers contain toxins known as cardiac glycosides, saponins and oleandroside, which can result in cardiac arrest, seizures, coma and death. The sap is also considered a skin irritant. Another plant, called the suicide tree, belongs to the same family as oleander and is also toxic, having a chemical named cerberin, which can harm calcium in the heart.

Also known as Atropa belladonna, Deadly Nightshade is another plant that has false allure, especially for children, and adults, too. It has sweet black berries, being a native of southern Europe and Asia and some parts of North America, especially in wooded areas.  But it is considered lethal, containing atropine and scopolamine in its leaves and steam, and can cause paralysis in muscles, including the heart.

The plant is considered so dangerous that someone doesn’t even have to eat it directly to be stricken. For instance, if someone drank milk or ate meat from a cow that had taken the plant, the results for a human can be severe illness or death. The plant found in North America has small white flowers. A toxin named tremetol is in the plant, known as ageratina altissima, which can cause serious intestinal issues. It became infamous as being linked to the death of Abraham Lincoln’s mother Nancy Hanks.

Ricinus communis), widely grown as ornamental plant, it is native to Africa. There is a contradiction in the poisonous plant: while the seeds have castor oil, they also contain the deadly poison ricin. Even a small seed from the castor bean that is ingested can kill.

The plant, also called aconitum napellus, is majestically purple. It is native to western and central Europe. The perennial plant can be one meter tall. But all of the plant is considered poisonous, and may be harmful even if touched, never mind eating. It can cause numbness, vomiting and diarrhea, and has been linked to being fatal.

If there is a concern about poison and someone needs immediate help, it is advised to call 9-1-1. The U.S. Health Resources & Services Administration also has a help line, at 1-800-222-1222.

Melissa Petruzzello. 7 of the World’s Deadliest Plants. 2018. Retrieved from:

The National Institute for Occupational Safety and Health (NIOSH), Centers for Disease Control and Prevention. 2018. Retrieved from:

Robbie Gonzales. 10 of the World’s Deadliest Plants – And How They Kill You. Gizmodo.com. Retrieved from: