What’s The Difference Between Salt And Sodium 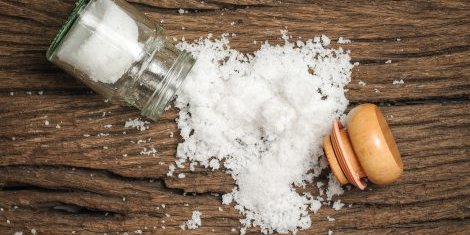 Salt and sodium and How Much Is Too Much?

One of the first recommendations from doctors for high blood pressure is to reduce sodium intake. Most people interpret the suggestion to mean that reducing their consumption of table salt is the same as reducing sodium. It’s a common misperception that salt and sodium are interchangeable.

However, sodium is one of the two chemicals in salt. Table salt (sodium chloride) is a combination of sodium and chlorine. This is also the reason that food labels give the sodium content and don’t say anything about salt.

Sodium’s Function in the Body

Every cell in the body contains sodium. Sodium is a mineral that carries electric charges in blood and other bodily fluids. One of the reasons that a doctor prescribes reducing sodium is that sodium along with other ions regulates cell pressure and blood volume, which is linked to blood pressure. Sodium also has different roles in the body:

Sodium and Salt Amounts Are Not Equal

The reason for this is that, as mentioned above, salt is not just sodium. It also contains chlorine. When salt ions break down, they don’t divide evenly between chlorine and sodium ions. They can’t breakdown evenly because the ions of sodium and chlorine don’t weigh the same. Therefore, the amount of salt intake cannot equal the amount of sodium.

How Much Salt Is Too Much?

One of the other questions about sodium intake is how much is too much?  A U.S. Department of Health and Human Services’ study found that the average adult consumed 3,592 mg of salt which is 1292 mg above the recommended 2,300 mg. The daily recommended amount equals to about one teaspoon for people over 14 years old.

So, how is it that Americans are consuming considerably more sodium than they should? Processed foods and restaurants are the chief reasons. Seventy-five percent of sodium that people consume comes from processed foods and eating out at restaurants. Cured meats, pizza, snacks, cheese, soup, bread, sandwiches, poultry, pasta, and meat dishes are the top ten sources for 40% of sodium intake according to the CDC.[ii]

How to Reduce Sodium in Your Diet

Reducing sodium/salt intake reduces the chance of high blood pressure that can lead to heart disease or stroke. Considering that 1 in 3 American adults have high blood pressure, sodium intake is a national health concern. Also, only half of the people with high blood pressure can regulate it. Here are a few suggestions from the Center for Disease Control and Prevention (CDC) to reduce sodium.

As the data shows, Americans eat too much salt. Part of the problem is that for many people, they don’t pay attention to how much sodium they are eating in a day. However, being aware of how common salt is in food can be the first step to reducing it.

Helmenstine, Anne Marie, Ph.D.  What is the Difference Between Sodium and Salt? (April 27, 2018). Retrieved from https://www.thoughtco.com/difference-between-sodium-and-salt-6084988.

How to Reduce Sodium. Retrieved from https://www.cdc.gov/salt/reduce_sodium_tips.htm.