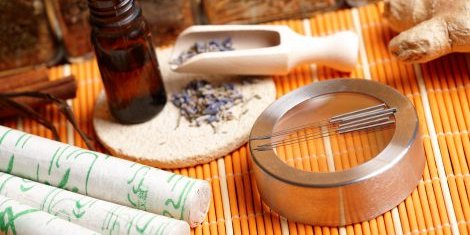 Traditional Chinese Medicine (TCM), particularly the five pillars were established in China thousands of years ago. It is still practiced in China although it has evolved over the centuries. Also, it has expanded beyond China with many practitioners worldwide and many more benefiting from its therapies.

While many people are familiar with acupuncture or Chinese herbs they may not know that these two practices are just two of the five therapies under the umbrellas of TCM. The forms of TCM treatment are called the Five Pillars. Typically, a TCM practitioner, especially in the West, is trained in one or several of the practices. For example, an acupuncturist may also be an herbalist, but can also recommend dietary changes; rarely is one trained in all five.

Many people think that TCM is only for when you are sick. While TCM helps when someone is ill, it is also used to keep people healthy. To maintain and improve health, TCM uses a combination of the five pillars: acupuncture and moxibustion, nutrition and Chinese herbal medicine, exercise and meditation, physical manipulation, and feng shui.

Acupuncture is based on the TCM philosophy of subtle energy (qi, pronounced chi) that runs through the body and all things in the universe. Qi is affected by all things that humans encounter including foods, the environment, time of day, and other stimuli. Qi can become stagnant or blocked; acupuncture is one of the TCM therapies that can unblock or stimulate qi. When qi flows, the body is in balance and healthy. Acupuncturists are trained to stimulate specific areas of the body by inserting very fine needles into meridian (energy) channels.

Moxibustion also relies on the meridians, but heat is applied to the body alone or in conjunction with needles. The heat can be applied directly or indirectly. For example, indirectly, the top of the needles can be heated with moxa. Directly, mugwort, an herb used to make the moxa is heated on specific areas of the body. Typically, it is removed before it burns the body. Using indirect heat is the more popular form of moxibustion. Traditional TCM texts considered moxibustion as more potent than needles.

In TCM, nutrition is critical. Dietary recommendations are personalized for each patient’s needs.

Chinese medicinal herbs in TCM are the counterpart to Western pharmaceutical medicine. Most herbal formulas contain various herbs and can include as many as twelve different ones. Unlike Western medicine, they are customized depending on the diagnosis or needs of the patient. The medication can come in powders, pills, syrups, teas, plasters, and other forms.

Qigong and tai chi are just two of several forms of exercise that help keep the qi freely flowing in the body. Like in the West, exercise strengthens the body and helps with emotions.

Massaging or manipulating body tissues is another way that blocked and stagnant energy can be released. Acupressure points on the body similar to acupuncture points when pressed or kneaded can provide relief for many health conditions, such as headaches and pain. Other bodywork can include tui na and gua sha.

Traditional Chinese Medicine is about creating harmony and balance in the body in many ways. One of them is the arrangement of a person’s physical space to create peace and allow energy to flow freely. While feng shui in the U.S. was a fad for a while, it’s an art in China that has been practiced for thousands of years.

Feng Shui means wind and water and is based on the Chinese system of geometric spaces. Also, it’s not just about arranging furniture, mirrors, plants, etc. in the house or office. Using a humidifier, removing clutter, and washing dirty windows can also bring harmony into the home if they’re needed.

The five pillars of Traditional Chinese Medicine revolve around the concept of qi and the need to keep it balanced and flowing freely. Also, they include all the aspects of life including our living and working spaces. In other words, the five pillars take into consideration the whole body.

The Five Pillars of Traditional Chinese Medicine. Retrieved from https://www.easterncurrents.ca/for-patients/the-five-pillars-of-tcm