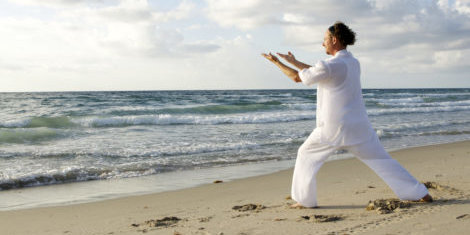 Tai Chi helps prevent falls says a new study. Published in the Journal of the American Geriatrics Society, the researchers found the practice of Tai Chi by older adults reduced the occurrence of falls by 43% and the number of injury-related falls by 50%. These results even captured the attention of TIME magazine which published an article titled, “How Tai Chi Makes You Stronger.”

Falling remains a main cause of traumatic injury in older adults with injuries sustained from falls often leading to death. Statistics reported by the National Council on Aging reveal the danger:

Even falls that result in minor injury can have a dramatic effect on the individual. Fear of falling may discourage activity and socializing, leading to both physical decline and greater feelings of helplessness and possible depression. The need for safe and accessible exercise and activity to build strength and balance in seniors has prompted researchers to continue studying practices like Tai Chi to evaluate its effectiveness.

This recent study reviewed results from ten earlier controlled studies which explored the effect of Tai Chi on the risk of falling. Each of the studies reviewed by the researchers compared Tai Chi against another therapy such as low intensity exercise. The researchers concluded there was “high-quality evidence” for some protective effect over the short- and long-term.

The older adults in the studies had practiced Tai Chi for one hour, one to three times every week. Benefits were observed in as little as 12 weeks.

Tai Chi’s has been popular among the elderly in China for centuries for its slow, fluid motions that promote strength and balance. Researchers have also reported it supports overall health with benefits including:

One of the major benefits of Tai Chi for seniors is its adaptability. It can be practiced by anyone regardless of current physical condition or status. It can be practiced standing or sitting and can be adapted to accommodate physical limitations due to joint pain and arthritis for example.

Like most research, this study recommends further investigation to understand the benefits more fully. Yet, this recent study supports the findings of many earlier studies and the experience of Tai Chi practitioners going back centuries.

Tips to Stay on Track with Fitness Goals