Radix Astragali Is A ‘Leader Of Tonics’ 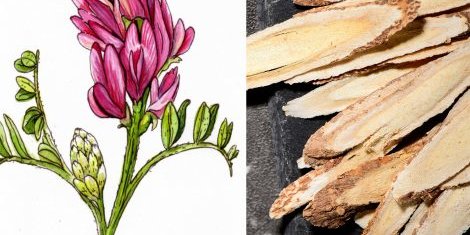 Radix astragalus is a root that has wide-ranging uses ranging from nourishing the blood, spleen, and lungs to promoting metabolism and regulating the immune system. It is known for boosting energy and “leader of tonics.”

Radix astragali (Huang Qi), also is known as Astragalus root, Milk-Vetch root, and is gathered in the autumn for higher quality and is sweet in flavor.  The root of Astragalus. Membranous is often used with other herbs traditional Chinese medicine (TCM) for improved strength. The genus Astragalus is one of the largest groups of flowering plants and belongs to the legume family, Fabaeae, which includes peas and beans. The plant can reach up to 36 inches in height. Although there are more than 2,000 species of astragalus, only two related species are used for health purposes.

After its fibrous roots are removed, the roots are dried in the sun, soaked in water and cut into slices. It can be used raw or stir-fried. The herb’s Chinese name “Huang qi” is comprised of two Chinese words meaning “yellow” and “superior.”

Among its many properties, it can also be used for recovery from severe blood loss, improve the body’s resistance to disease, fight fatigue, increase stamina, protect liver function, regulate blood sugar and lower blood pressure, and also has a diuretic effect. It also strengthens the spleen, generates body fluids, promotes urination and reduces edema, while dispelling toxins.

The herb supports the body’s immune system, and has been known to have antiviral and antibacterial properties, and is believed to stimulate the body to produce interferons, which are proteins that trigger the immune system to respond to a foreign invasion. In that way, it fights pathogens and helps destroy tumor cells.

The herb has been used to help cancer patients recover quicker, particularly those undergoing chemotherapy or radiation therapy. Several studies have shown that Radix astragali has properties that fight other cancers, such as colon, gastric and hepatic.

The Lungs and Spleen

Among its health benefits, it is used in tonifying the spleen, and related issues, such as shortness of breath or poor appetite linked to spleen deficiencies. It is also indicated for chronic cough and dyspnea, and mental fatigue due to lung deficiency.

In Traditional Chinese Medicine, the concept of qi or chi focuses on vital fluids and energy through our bodies. Under Chinese medicine, controlling sweat is important and that reflects the good functioning of qi.  Radix Astragali are used to control sweating in the body and recovery from blood loss and fatigue or is used for deficiency sweating syndrome.

Saponins present in astragalus have anti-inflammatory and anti-hypertensive functions and make the herb a natural diuretic.

The herb should be used with care in relation to certain autoimmune diseases such as rheumatoid arthritis, lupus, Crohn’s disease; it should not be used by those who had transplant surgery. Certain drugs such as Cyclophosphamide, Lithium, and immunosuppressants should be avoided.