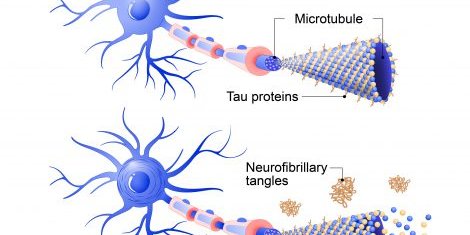 Neurodegenerative diseases such as Alzheimer’s and Parkinson’s have long been regarded as incurable and irreversible, but experts say new evidence shows the diseases can be managed and prevented in the early stages.

If patients go through certain examinations before significant clinical symptoms appear by identifying “bad proteins” that cause damage to brain nerves, these diseases can be properly dealt with or even stopped at an early stage. That’s why it is important that patients undergo physical examinations before significant clinical symptoms appear.

Our brains contain nerve fiber. When the cerebral cortex gives an order, it is transported via the nerve fiber to the brain stem, and then the spinal cord and peripheral nerve muscle. Neurodegenerative diseases result in loss of nerve structure and function and affect body activities such as balance, movement, and heart function. As age increases, especially after middle age, neurodegenerative diseases can occur at a higher rate. It is a common characteristic of several conditions, including Alzheimer’s and Parkinson’s diseases.

Neurodegenerative diseases have different causes, and even affect different areas of the brain, but they all have some type of toxic protein within the brain. These are the “bad proteins.”

The true identity of “bad protein”

The “bad proteins” in the brain can disrupt the brain’s structure, with out-of-control membrane functions that can lead to neurodegenerative diseases. Since “bad protein” is toxic, its deposits on nerve fiber can slowly destroy it, and also impact neurons and nerve conduction, with the toxicity harming brain nerve cells. The technical terms for these “bad proteins” are A? and tau protein. A? protein is a starch-like protein. If it is not eliminated at the outset, the starch-like material will accumulate, which leads to fewer neurons in the brain. Tau protein is the microtubules of nerve fibers. If tau protein becomes over-phosphorylated, it becomes like an electric cord with ruined inside and outside layers. When the neuron and nerve fiber are both destroyed, the nerve function will suffer.

The brain is an organ that can protect itself, such as with the blood- brain barrier, a barrier between the brain tissue and blood vessel endothelium. Other barriers include the basement membrane and glial cells.  Those barriers keep the vascular toxic substances out of the brain.  The toxic protein inside the brain can be drained out by blood vessels, forming a dynamic balance.

Alzheimer’s disease is often caused by the destruction of the blood-brain barrier, and the bad proteins in the brain that cannot be effectively discharged through the blood vessels.

How to identify the bad protein in the brain?

PET-CT image. We can identify bad protein directly from a PET-CT image, which can clearly detect whether there are deposits of bad protein in the brain. The PET-CT, which is Positron Emission Tomography-Computed Tomography, uses small radioactive materials called radiotracers, a special camera, and a computer to help evaluate organ and tissue functions. The image shows the severity of a condition. When conducting an annual physical examination, a healthcare practitioner working with a patient can choose to do PT-CT to see if the bad protein increases in the brain. The bigger the red area that appears on a PTC-CT image, the more severe is the condition.

Blood test.  Laboratory screening tests of blood are used to help diagnose disease, and better understand the disease process, and can tell whether the bad protein increases in the body. That can be done through chemical and metabolic testing of the blood.

Lumbar puncture. If it is necessary, healthcare providers can also conduct a lumbar puncture (LP) test to see if the ‘bad protein’ increases in cerebrospinal fluid. [Experts advice] When conducting the annual physical examination, a healthcare provider can choose to do PET-CT to see if the ‘bad protein’ increases in a patient’s brain. A lumbar puncture or spinal tap may be done to diagnose or treat a condition. To help diagnose various disorders, a healthcare provider inserts a hollow needle into a space surrounding the spinal column, known as the subarachnoid space), in the lower back to withdraw some cerebrospinal fluid (CSF) or inject the medicine.

Alzheimer’s disease mainly occurs in the thalamus and hippocampus. First, the accumulation of bad proteins happens in the hippocampus, which then slowly poisons neurons and then spreads to other places with devastating effects.

Long-term use of aluminum pots may result in poisoning, which can induce nerve excitability toxicity, cause the apoptosis of neurons, nerve degeneration.

The early symptoms of Alzheimer’s disease.

The economic burden of Alzheimer’s disease is big, so prevention of it is very important.

For example, if someone shows symptoms of Alzheimer’s disease at the age of 65 or 70, the problem may have started two decades earlier. At that time, when he or she was 45 or 50 years old, the bad protein may have already appeared in the brain and would begin to slowly show their effects. That reflects the importance of diagnosing before symptoms appear and cleansing the “bad protein.”

Alzheimer’s disease is treatable although there is no current cure.  Early detection and early treatment may prevent Alzheimer’s disease and even reverse it. Drug and non-drug treatments may help cognitive and behavioral symptoms.  Research shows that one in three cases of Alzheimer’s is preventable.

There are various treatments that can reduce symptoms of Alzheimer’s and because nerve damage is often progressive, that is important to consider. Evaluating the body’s immune system, controlling blood pressure, blood sugar, blood lips are important. Increasing social activity, and being in a happy mood, for instance – are very effective little day-to-day steps help stave off Alzheimer’s disease. It is good for the brain and the balance needed between it and the blood-brain barrier.

Experts tell us that new drugs for Alzheimer’s disease have been in clinical trials for some time now. There are two kinds of clinical trial drug that can resist A? protein. There will also be A? protein vaccine, through vaccination it can produce an antibody to A? protein; this method is also in the development.

Many advances have come in the study of Alzheimer’s disease; though there is still a long way to go to study its progression. Still, there are many things that healthcare providers and patients can do to improve the symptoms of Alzheimer’s or deter it in the meantime.