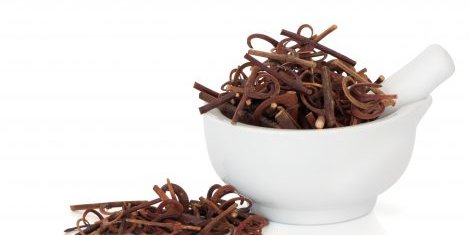 The herbal material is the dried thorny branches of Uncaria rhynchophylla, and some other plants of the same genus. These plants are distributed in a wide area of China. The branches are collected in autumn and winter, with leaves removed, cut into pieces, and dried naturally.

Traditional Chinese Medicine products or formulae containing UR have been used frequently for treating cerebrovascular and neurological disorders. Pharmacological studies showed the extracts of UR to be neuroprotective, anticonvulsive, and antipsychotic, which support its clinical application. These effects are largely attributed to its predominant active components, alkaloids, notably rhynchophylline and its isomer, isorhynchophylline.

Uncaria rhynchophylla, used alone or in combination with other herbs, is well known for its clinical benefit for treating dizziness, headache, epilepsy and hypertension. One classical formula with Uncaria rhynchophylla and Gastrodia elata as the key ingredients (Tian Ma Gou Teng Yin), is routinely used in clinical practice for relieving dizziness, headache and insomnia due to hypertension, cerebrovascular diseases, and auditory vertigo.

One of the most recognized benefits is for relieving various types of headache. A review [1] of the clinical application of Uncaria rhynchophylla showed that the herb is effective for migraine, headache caused by hypertension, vascular headache, and nitroglycerin induced headache.

According to a report in 2011 [2], a pilot clinical study conducted by researchers at the Hong Kong Baptist University, revealed that Parkinson’s disease patients who had received the Chinese medicine treatment containing Uncaria rhynchophylla, showed improved communication skills and reduced non-motor symptoms, compared with control group.

Results from a large body of pharmacological data have linked Uncaria rhynchophylla or its constituents with effect of modulating a number of neurotransmitters, which may help to elucidate the mode of action of the clinical outcomes for neurological diseases.  Water-ethanol extract of Uncaria rhynchophylla (EUR) was shown to significantly improve the exploratory behavior, spatial learning and memory function in D-gal-treated mice, and significantly decreased the activity of acetylcholinesterase and the level of malondialdehyde in the brains of D-gal-treated mice. These results indicate that EUR ameliorates cognitive deficits induced by D-gal in mice, and that this action may be mediated inhibition of acetylcholinesterase activity [3].

Some data showed the main ingredient of UR are acting as sodium ion channel blocker, which may be the underline mechanism for relieving neurological pain and headaches.

In one study [4] that using a Morris water-maze task and passive avoidance task system, ameliorating effects was observed on scopolamine-induced memory impaired mice. This results shed some light on the understanding of the observed effect of UR extract in improving cognition in patients with dementia.