The Sweet Possibilities Of Honeysuckle 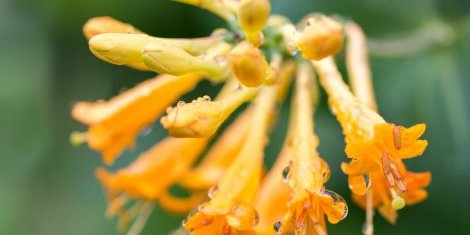 Lonicera japonica, also known as the Japanese honeysuckle, has been cited and studied for being linked to wide-range antimicrobial and anti-inflammatory impacts.  Although they are flowers, when someone uses them for tea, for instance, they may not resemble any because they are they often harvested before buds open.  Honeysuckle flower is one of the most commonly used in traditional Chinese medicine, and also known as Jin Yin Hua.  Besides its medicinal properties, some people may just plant them to simply showcase the beautiful flowers.

In Traditional Chinese Medicine, honeysuckle has been associated with preventing unhealthy conditions involving the lung, stomach and large intestine. That also includes could include nausea, stomach and digestive disorders, arthritis, cold cough and flu. The flowers are also considered an important ingredient in the fight against inflammation, itching and pus-forming infections, which can result in swelling, pain and redness.

“Pharmacological studies show that (Lonicera japonica) possessed various actions, such as anti-inflammatory, antiviral, anti-diabetic, anti-allergic and anti-oxidants and could be used to treat many viral diseases,” says BioMed Research International.  “In addition, it is also used as healthy food, cosmetics, soft beverages and ornamental groundcover for its specific activities.”

“It is commonly used in traditional Chinese medicine for thousands of years with confirmed curative effects,” the report adds.

Scientists believe there will be future studies on Lonicera japonica that may open the door for development of even more health-related possibilities.

With its many species, the honeysuckle varies in sizes and shapes. Generally, Lonicera japonica is a semi-evergreen woody vine, which can grow as high 9 meters, its vines twisting around vertical structures. Its fruit can be red or black and have several hard seeds. In most species, however, the berries are regarded as mildly poisonous, but the leaves and flowers are considered medicinal properties. Fine soft hairs cover the leaves and stem, and are admired for their sweet fragrance.

More than 200 chemical components are included in honeysuckle, including organic acids, volatile oils, iridoids and flavonoids. Volatile oils, one of the important effective constituents of Lonicera japonica, play a significant role in their pharmacological

When used alone or with other herbs, honeysuckle can be used for various conditionshttp://www.shen-nong.com/eng/herbal/jinyinhua.html

Fever: Honeysuckle flower, when combined with other herbs, such as the weeping forsythia capsule, great burdock fruit and peppermint, can be used to treat common cold and flu symptoms.

Honeysuckle and Forysthia Power (Yin Qiao Jie Du San). This formula may be effective at the beginning stages of sore throat and headaches.  The remedies have shown efficacy against the flu virus, but more studies are needed to show how.

Traditional Chinese Medicine has long used honeysuckle tea, from the plant’s leaves and flowers, especially for colds and flu. The typical dose of honeysuckle flower is between six and 15 grams, to be taken orally. Larger doses can be used when the herb is applied to the skin

The leaves and stems of honeysuckle contain substances called saponins, with care poorly absorbed by the human body but can be dangerous if taken in extreme amounts.