The Great Freshness Of (Pepper) Mint 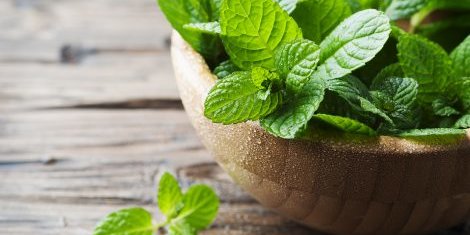 Walk outside in a garden, step outside your home, and the fragrance is unmistakable and soothing.

There is freshness sweeping in from the breezes, a smile crosses your lips. It’s mint.

Mint has been used for health purposes for thousands of years. It was mentioned in records from ancient Greece, Rome, and Egypt, according to the National Center for Complementary and Integrative Health.

In traditional Chinese Medicine, mint is known for cooling the eyes and head, and in its delightful smoothness, for reducing emotional or physical tension. It also has been noted for supporting the lungs and intestines, with its gentle form of relief.

Once the mint oils enter our bloodstream, the theory goes, they relax smooth muscles in the airways and circulatory tissues in the intestines and restores balance. Mints also are known to have anti-inflammation and antibacterial effects on insect bites.

Known as Bo He, mint is also used for treating headache, bloodshot eyes and itching. There is an array of other benefits as well, such as being a stimulant to settle the stomach, treat nausea and irritable bowel syndrome. It is also used to clean and beautify the skin.

Bo He, as an aromatic plant, has more than 500 species, almost all with a cool and refreshing center. Among them the best known are black peppermint (English peppermint or mitcham mint and spearmint, Mentha, speicata L. Everywhere, mint is known for being a terrific addition to meals or teas.

The mint family, Lamiacae, has 7,000 species as part of aromatic plants. Both the leaves and the stem are used in the herbal preparation of mint oil. The volatile oils include methol, thymol, citronllal, limonne, camphor, carvacrol and linalool.

Mint oil is concentrated, and contains substances that give it the distinctive odor and flavor. It contains many chemicals, acids and compounds, including leucine, menthol and aspartic acid. Within this framework are the substances that make up mint’s healing properties. Various reports say that mint can inhibit bacteria such as staphylococcus aureus, staphylococcus albus and streptococcus, and some viruses.

Mint oil is available in many markets, where dried mint leaves and stems, which are crushed, are also sold a spices or herbal teas.

Within the mint family are spearmint, hyssop, motherwort, marjoram, skullcap, holy basil, apple mint, chocolate mint, pineapple mint and others.  And, of course, there is peppermint, among the most popular.

Peppermint, known as a flavoring agent in foods and peppermint oil, is also used to create the pleasant fragrance in soaps and cosmetics, the NCCIH says. Like other mints, peppermint oil is used for headache, muscle aches and itching. The peppermint leaf is available in capsules and as a liquid extract.

Peppermint and spearmint contain menthol, which is linked to many health benefits from their coolness it generates. Peppermint is a traditional remedy for a number of conditions like other mints, including menstrual pain and flatulence.

Peppermint generally grows best in moist, shaded locations. Their tiny flowers can be white, pink or light purple and have small dark brown fruits. The edible parts are stems and leaves. The cultivated plants are used for better oil content.

Why Does Mint Smell So Good

That great smell – well – it’s all due to the volatile oils, which are the source of the flavors and many of the medicinal uses. When we get the scent of mint or other aromatic plants, our nerves are stimulated and send impulses elsewhere in our brains, and that may help reduce stress. When the oils enter our blood stream, they can also smooth muscles.

Several studies indicate that peppermint oil in enteric-coated capsules may improve IBS syndromes, according to the NCCIH.

Peppermint oil has been used topically for tension headaches and a limited amount of evidence suggests that it might be helpful for this purpose, the NCCIH says.

The possible side effects of taking peppermint include allergic reactions and heartburn. But capsules that are enteric-coated to reduce the likelihood of heartburn. Since peppermint oil is highly concentrated. When it is used for health purposes, only a few drops of peppermint oil are used.

Evidence also suggests that people with sensitive digestive systems may suffer moderate stomach disorders by ingesting mint. In addition, some Chinese studies have shown that high doses of mint oil can have a harmful effect on the female reproductive system by aborting early-stage pregnancies.