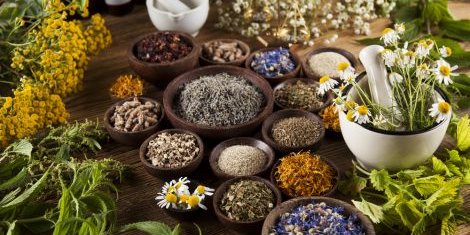 Each herb’s singular properties and its strategic combination with others is a basis of Chinese herbal medicine, (CHM) and multiple medicinal herbs are sometimes combined together, through synergism.  The scenarios and breakdown of each herb and how they are compatible, their relative value, and how they work together, is reflected in ancient and fascinating terms that even reflect a government hierarchy, from “emperor” to “servant.”

Synergism often targets and manages diseases that are too complex, either for singular drug treatment or use of a single herb.

Chinese herbal medicine are usually used in combination with two or more herbs (usually 3-15 herbs) with different properties synergistically formulated to form a compound medicine even though a single herb is prescribed, like “Du Seng Tang,” the single ginseng decoction. In thousands of years of practice of Chinese herbal medicine, many combinations have resulted, with over 100,000 formulas.

Although each individual herb is indicated for certain symptoms, when multiple herbs are administered together, the mixture is prepared and not at random, studies show. Instead, they “work in unison through mutual interaction resembling different roles of the government official hierarchy,” with each herb figuratively designed as either “emperor,” “minister,” “assistant” or “servant,” not only for their actions but the impact of ingredients relate to emotions meaning each herb plays different role in the formula. For example, the “emperor” is the principal herbal ingredient in modern texts and is the substance that provides the main therapeutic effect in the formula; the “minister” enhances or assist the therapeutic actions of the “emperor”; the “assistant” provides one or more of the following functions: treating accompanying symptoms, diminishing the harshness or toxicity of the primary substances; and the “servant” either guides the other herbs in the formula to a specific channel or organ or exert a harmonizing influence.

Traditionally, there are seven types of Chinese herbal combinatory interactions, differentiated by their pharmacological effects (seven emotions herbal medicine to elucidate the seven possible outcomes that could be yielded if multiple herbs with different pharmacological properties are used in combination. From a modern pharmacology perspective, this is a theory about herb-herb interactions. CHM formulae are also formed according these seven different drug properties.

The pathogenesis and progression of diseases are too complex for single drug treatment, such as cardiovascular disease and others.  Originally, practitioners of Chinese herbal medicine used just single herbs for disease treatment, but over time they gained more experience from clinical practice and learned that the causes of diseases were the imbalance among different systems in the body.

While herbs can be compatible it is also important to understand their potential toxicity and interactions.

There are a host of herbal combinations reflective of synergism that impacts a variety of diseases and ailments, through synergism.

An example of herbal combination is Shaoyao Gancao Decoction (SGD), composed of peony and licorice, having the efficacy of nourishing liver, relaxing spasm and relieving pain. Yet another is Decoction of Ephedra, Mahuang Tang, which contains ephedra, cinnamon twig, bitter apricot seed and licorice root. The prescription is used not only for its diaphoretic effect but also for the relief of coughing and asthma, as well as reducing headaches and general aching during a common cold.

The Pulse-Activating Powder (Shengmai San) is another example of an herbal combination. The formula consists of ginseng root, Ophioogon (dwarf lily turf) root, and Shisandra  (magnolia vine), fruit.  They are indicated for the deficiency syndrome and body fluid as manifested by profuse sweating dryness of moth, shortness of breath, thirst and a faint pulse.

A study published in Frontiers in Pharmacy said substantial progress has been made over the last decades in the “study of efficacy and mode of actions of multiple herbs and their active components” although there has been controversy over findings.

And with evolving scientific research, the synergism among herbs is investigated in the correct drug combinations for various diseases, such as cardiovascular disease, for instance, according to a study published in Evidence-Based Complementary and Alternative Medicine.

When medications are used to treat cardiac issues, usually a combination of drugs are involved that target different organs and systems. That reflects the “multiple nature of therapy” also used when multiple herbs are involved with multi-dimensional results, because of the complex nature of cardiovascular disease, according to the Evidence-Based Complementary and Alternative Medicine.  An example includes the Compound Danshen Formula (CDF), which has been used in the treatment of cardiovascular disease for more than 30 years and commonly used to treat coronary artery disease, including angina and acute myocardial infarction, the study said.

The CDF has been used in many different products produced by hundreds of Chinese pharmaceutical companies, the study said. In the CDF formula, the dried root of the plant Danshen (Salvia miltiorrhiza, red sage) serves as the key herb with action of increasing blood flow to the heart. A secondary herb is Sanqi (Panax notoginseng, notoginseng), in which the dry root of the Sanqi has been traditionally used as a hemostatic medicine to control internal and external bleeding. A third herb, Bingpian, (Dryobalanops aromitcaa, borneol) is used to increase the blood concentration of Danshen and Sanqi.