Symptoms And Dangers Of Magnesium Deficiency 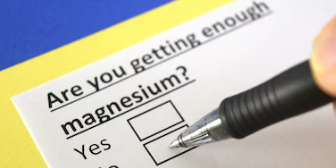 At least 74% of US adults ages 20-85 are magnesium deficient according to a review of data from the National Health and Nutrition Examination Survey (NHANES) 2001-2014.[i] The key phrase is “at least.” Based on data from the review, the number could be – and likely is – much higher.

Some doctors say the number is above 80%. The exact number really doesn’t matter though, does it? The reality is that in the US, 3 of every 4 adults aren’t getting enough magnesium. As a cofactor in more than 300 metabolic reactions, this spells big trouble.

The NHANES review evaluated magnesium intake based on the nutrient profile of foods consumed, a standard conversion of foods into nutrients and additional lifestyle and health factors. Simply stated, the magnesium deficiency identified in the study was based on nutrients consumed, not on factors that can accelerate its loss. For example, strenuous exercise can deplete magnesium from tissue.[iii] Mental and physical stress can too.[iv]

This makes recognizing any symptom of magnesium deficiency important. Many symptoms, however, are not as apparent as others as researchers are discovering.

Magnesium’s role in so many different aspects of metabolism make subclinical symptoms most likely to appear first. Many of these less obvious symptoms continue to be discovered.

All of these reveal the far-reaching impact of magnesium deficiency. Heart disease is the number one killer of adults in the United States. Vitamin D is essential for strong, healthy bones. It’s also required to activate immune cells in response to infection. Uric acid is often attributed to gout, but scientists have also found that its connected to high blood pressure, kidney disease, obesity and more.[viii]

With a connection with 300+ metabolic reactions, the potential impacts of magnesium deficiency on human health could be almost unlimited. The challenge is to recognize them when they appear.

Here is a list of potentially observable symptoms of magnesium deficiency. The recent study Subclinical Magnesium Deficiency: A principle driver of cardiovascular disease and a public health crisis offers a more complete list.[ix]

There are also measurable signs of magnesium deficiency in calcium and vitamin K deficiencies.

With research indicating widespread magnesium deficiency, the best answer may simply to encourage increased dietary intake of foods rich in magnesium. This approach would ensure a person gets enough magnesium but prevent getting too much as the body would release excess dietary magnesium through the kidneys. Supplementation is an option, but should be monitored both for quality of supplement, bioavailability and dose.