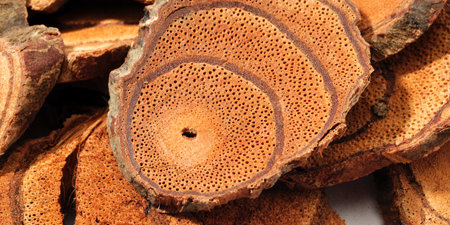 Spatholobus is a commonly used traditional Chinese herb, for treating gynecological and skeleton-muscular conditions. The earliest record of its medical use was in a classic work titled “Ben Cao Gang Mu Shi Yi” (A Supplement to the Compendium of Materia Medica), compiled during 18th century in China.

Traditionally, the dried herb can be used in combination with other herbs to make a decoction, or soaked in Chinese rice wine and consumed as an alcoholic health drink.

Spatholobus can also be found as one of the ingredients in several formulated TCM products, for similar indications.

The chemical constituents of Spatholobus include flavo­noid, terpene, sterols, anthraquinones, lactone and volatile oil. Many of these ingredients are found to possess anti-oxidant and anti-inflammatory effects.

Due to its TCM function of improving circulation, nourishing blood, strengthening and mobilizing ligament and tendon, spatholobus is used for a wide range of indications, including anemia, menstrual abnormities (irregular menstruation, dysmenorrhea and amenorrhea), and chronic pain, numbness and stiffness caused by arthritis or injury.

There are also clinical research reports showing its benefit for treating leukopenia (a decrease in the number of white blood cells), and hyperplasia of the mammary glands.

Results from many of the pharmacological studies support its traditional use. In one study, an ethanol extract of Spatholobus was found to accelerate the recovery of white blood cells, red blood cell and platelet counts in peripheral blood of mice with bone marrow suppression [1]. In another study a water extract of spatholobus was demonstrated to inhibit osteoclast differentiation and function, which suggest that it has a potential for treating pathological bone diseases caused by excessive bone resorption [2]

Brain protection: A recent study demonstrated the neuro-protective effect of Spatholobus in cerebral ischemic rats and concluded that this effect attributed to its antioxidant, anti-apoptotic and anti-inflammatory activity [4]