Is The Raw Food Diet For You? 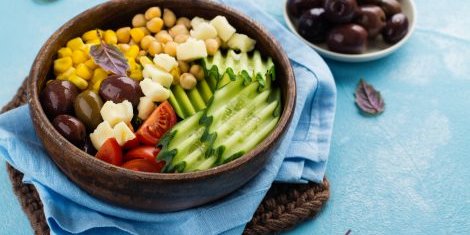 While the raw diet may seem like a recent addition to the “what is the best diet” trend, it’s been around since the 1800s. However, as raw food enthusiasts say, our ancestors were eating raw food before there was fire and after they discovered it. That said, what is the raw diet and is it for you? We hope to answer those questions.

Raw foodism is another term that refers to a diet where raw foods comprise the primary source of nutrition. Typically, at least seventy-five percent of the food eaten needs to be raw. For food to be considered raw, it cannot be heated above 116°F.

Why the Raw Food Diet?

Raw food aficionados believe that cooking foods destroy enzymes and other nutrients in foods which reduces the foods energy or “life force.” In other words, raw food is “living food” because of enzymes which help with digestion and absorption of nutrients.

The premise behind the reason cooked foods are not consumed is that the molecular structure of food changes during the cooking process. Therefore, nutrients are lost which makes the food less nutritious. Also, in some foods, harmful compounds are produced by cooking. For example, nitrosamines are produced when meats cured with sodium nitrate, such as bacon, are cooked. Acrylamide and heterocyclic amines are other carcinogenic compounds that are produced in certain foods depending on the cooking method and food. Cooking foods can also kill harmful bacteria, however.

There are few studies on the benefits of eating raw foods, and the results are mixed. However, a study reported in the Journal of Nutrition showed that cholesterol levels were lowered in research participants. Vitamin B12 also was found to be low, which is not uncommon in vegetarian diets. Another study showed that it was good for weight loss.

The benefits reported by proponents of the diet include mental alertness, increased energy, and a healthier immune system. Here are some health reasons why advocates say they embrace the raw food diet.

What Do You Eat on the Raw Foodism Diet?

It may seem as if only fresh fruits and vegetables are the only foods available on the diet. There are, however, other permissible foods. Here’s a few of them.

While most raw diet aficionados are vegans, there are some that do eat meat. They eat dried meats without any preservatives, sugars, or salt. Also, uncooked eggs and raw fish (akin to sushi) are eaten by some people adhering to a raw diet.

Canned foods, baked goods, boxed foods, or any food that has been processed or treated are strictly prohibited. Fermented foods made with yeast are not eaten, such as kombucha or alcoholic beverages.

Among the raw food supporters, there is some disagreement about what kinds of raw food are the most nutritious. Some make a distinction between “living foods” and raw foods. For example, fruits eaten right after being picked are considered “living food” because they have the highest amounts of enzymes. In comparison, fruits purchased from the grocery are considered raw because they have lost some of their enzymatic nutrition. “Living food” is thought to be the most beneficial.

Seeds, nuts, and grains are sprouted before eating to make them “live foods.” Sprouting involves soaking them in water for about 24 hours or until they sprout. This process increases their enzyme levels and makes them “live food.”

While it may seem that the diet is primarily composed of salads or eating fruit from the fruit bowl, meals can be made from the diet. Many people who embrace the diet have food dehydrators to dry foods that can be used in multiple ways to simulate traditional foods. For example, there are several recipes for raw vegan “spaghetti and meatballs.”

The raw food diet is not for everyone. People with stomach issues may have a difficult time digesting raw food because they lack the necessary digestive enzymes. Also, vegetables from the cruciferous family (broccoli, cabbage, cauliflower, kale, and others) when eaten raw in excess can block thyroid function. Cooking destroys the plant compound, goitrogen, that interferes with the thyroid.

The raw food diet can be time intensive, especially in the beginning if you want to eat more than salads or fresh vegetables and fruits. People on the raw diet also need to make sure they are getting enough of the right nutrients, like protein, vitamin D, and vitamin B12. To help guide those interested in raw foodism, there a lot of information about it online including many recipes.

Axe, Dr. The Pros and Cons of a Raw Food Diet. Retrieved from https://draxe.com/raw-food-diet/.

The Living and Raw Foods F.A.Q. Retrieved from http://www.living-foods.com/faq.html

The why, how and consequences of cooking our food (November 08, 2010). Retrieved from https://www.eufic.org/en/food-safety/article/the-why-how-and-consequences-of-cooking-our-food.