Feeling Lousy? Could Be Food Poisoning 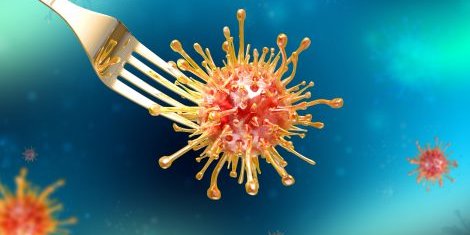 After you eat, you may feel over the next few days with abdominal cramps, a fever, headache, and just feeling lousy. That could be a sign you have food poisoning, also known as salmonella.

No, it is not named for the fish. Salmonella, a group of bacteria, is the most common cause of foodborne illness, and was named for a doctor named Salmon who discovered it more than 100 years ago. The illness that people get from Salmonella infection is called salmonellosis.

Salmonella comes from food contaminated with bacteria, which can happen during food processing or food handling. It only takes a tiny amount of bacteria to cause food illness.

Salmonella can occur in raw, tainted or live poultry, eggs, beef, fish and unwashed fruits and vegetables. People can get salmonella when they are handling food and don’t wash their hands, especially after being in contact with animals, such as chicks or rodents.

About one of six people in the U.S. will get some type of food poisoning this year. The

Centers for Disease Control and Prevention estimate 1.2 million illnesses, 23,000 hospitalizations and 450 deaths related to salmonella each year.  Food is the source for about one million of these illnesses.

Nausea, vomiting and diarrhea are the most common signs of salmonella, but fever and chills often accompany the illness. It can take a week  for symptoms of the illness to begin.

One of the most important things you can do if you get salmonella is drink plenty of liquids to replace fluids lost through vomiting or diarrhea.

There are herbs and alternative remedies that may be effective in reducing symptoms of food poisoning, and help speed recovery.  Traditional Chinese Medicine has been used for centuries to improve gastrointestinal dysfunction.

The most common causes of salmonella usually come from animals. Touching certain birds and lizards can spread the disease. Reptiles, baby chicks and small rodents are among the animals that may carry it.

Foods contaminated with bacteria can occur during food processing or food handling. Salmonella hides in cooked meats, such as chicken or beef. It is also found in meats or seafood, dairy products and lettuce, in packaged and prepared foods. Outbreaks of contamination have ranged from pre-cut fruit to dried coconut, frozen shredded coconut, chicken salad and sprouts, and imported spices. A kind of cereal was found to have salmonella problems.

Shell eggs have been known to carry the risk of salmonella, but it’s extremely uncommon. In some rare instances, water can be contaminated with salmonella.

Kratom, an herbal supplement that the Food and Drug Administration has said is not safe, also has had instances of containing salmonella, the agency said.

When someone is sick

Most people affected with salmonella develop diarrhea, fever and abdominal cramps, anywhere from 12 to 72 hours or nearly a week after infection. The illness usually lasts 4 to 7 days and most people recover without treatment. However, in some people, diarrhea may be so severe that the patient needs to be hospitalized.

Most people get better without treatment, but an infection could be more serious in infants or people with chronic conditions, according to the National Institute of Allergy and Infectious Diseases. If left untreated, salmonella poisoning can appear in joints and the urinary tract in a condition known as Reiters Syndrome. In some cases that could become permanent.

Taking care in handling food is one of the most important preventative practices in preventing salmonella.  For instance, take care when making or handling raw eggs or foods such as cookie dough or burgers. You should also make sure raw meat is cooked to the proper internal temperature, or properly refrigerated. You should always wash the food after purchasing.

What You Can Do

Healthline. What to Eat After Food Poisoning. Retrieved from: https://www.healthline.com/health/food-nutrition/what-to-eat-after-food-poisoning

Teatulia. What is Ginger? Retrieved from: https://www.teatulia.com/tea-varieties/what-is-ginger-tea.htm

Michael and Lesley Tierra’s East West School of Planetary Herbology. Salmonella in Species and the Herbal Treatment of Food Poisoning. Retrieved from: https://planetherbs.com/blogs/michaels-blogs/salmonella-in-spices-and-the-herbal-treatment-of-food-poisoning/