Caulis Spatholobi: An Herb Of Many Purposes – From Blood Flow To Immune Systems 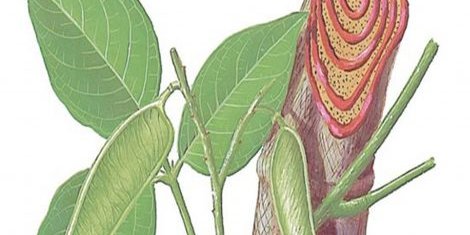 One of the great things about traditional Chinese herbal remedies is that they have functions that help relieve multiple illnesses, unlike many medications, which are directed for singular treatments. For instance, there may be medication for a stomach- ache, another for neck pain, and yet another drug for an earache.

Caulis Spatholobi (Ji Xue Teng), also known by names as Spatholobus Root and Vine Milettia Root consists of the dried dry stems of a Milettia reticulate Benth, a vine plant. It is one of those herbal remedies that has many functions in improving health, and it has a unique substance unlike other legumes. It offers a wide range of blood treatments, such as improving circulation and regulating menstruation. Caulis Spatholobi also has been shown to improve the immune system and is seen as a treatment for chronic immune system conditions.

The stem has a distinctive reddish brown color with rings, and is usually collected in the autumn and winter, and dried in the sun. It is found in the Guangxi and Yunnan provinces in China. A bright red sap oozes from it, which some liken to chicken blood, and its nickname in China is “Ji Xue Teng,” – chicken blood vine.  The herb is bitter though somewhat sweet, with a light smell.

What does it contain?

One of the major components is flavonoids, plant compounds found in nearly all fruits and vegetables, which are seen as powerful antioxidants with inflammatory and immune system benefits.  Other compounds in this herb include anthroquinones, lactones, volatile oils and others, with anti-oxidant or anti-inflammatory effects.

Many studies have particularly focused on its impact on the blood, and there have been reports showing that it activates blood circulation, and invigorates it, while nourishing it. Caulis Spatholobi regulates menstruation, which is linked with iron-associated conditions.  Other studies have resulted where Caulis Spatholobi can improve or accelerate the recovery of white and red blood cells, and platelet counts in mice related to bone marrow issues, and show the potential for treating bone diseases.

Studies have shown that the herb supplement is effective in treating leukopenia, a condition that results from long-term cancer treatment, such as with radiation or chemotherapy, which can undermine the immune system. The flavonoid in the herb also has an impact on reducing lung or colorectal cancer. There are also reports that compounds found in Caulis Spatholobi may be effect in chronic anemia, also linked to iron regulation and also for skin conditions, such as a sallow complexion resulting from blood deficiencies.

How it is taken

The stem can be taken by mouth, 10 to 15 grams, or up to 30 grams. The herb is sometimes made into wine or syrup, and can be used with other herbs, or used with Chinese rice wine, and drunk as an alcoholic health drink. Women who are pregnant should use the herb with caution, according to studies.