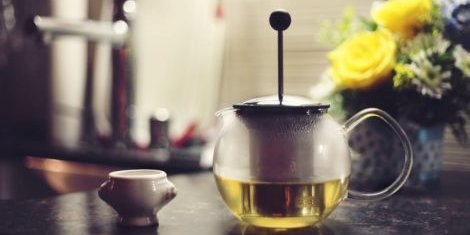 The legend of tea begins with its discovery in 2737 B.C. when dried leaves landed in a boiling cup of water that was being served to the Chinese emperor (iced tea wasn’t made until 1904!). Since this discovery, tea has taken the world by storm and brought many remedies to ailments and immense health benefits to all. It has created another way to increase the intake of fluids into the body as well (why do you think your mom tells you to drink tea every time you’re sick?).Besides being an “all-year round” beverage, tea is known for more than just a great side to have with a book and a rainy day. It can help prevent cancer, give you a boost of antioxidants, and even protect your teeth. The main benefits of tea go far beyond protecting your pearly whites. So what else can tea act as for you?

Green tea in particular is the super hero of anti-inflammatory compounds in tea. In any kind of tea you can find some sort of compound that decreases inflammation and inflammatory reactions. Because inflammation also tends to make you retain water, the properties of tea can help you feel and look thinner. According to a 2007 study lower inflammation levels were indicators that green tea can help prevent cardiovascular disease.

Next time you exercise try to add tea to the mix. The antioxidants in green tea extract (in particular) increase the likelihood of your body using fat as fuel. Through this you will increase your muscle endurance just by adding a bit of green tea extract to your pre-workout snack.

A Stimulant with less Caffeine than Coffee

Not that caffeine is bad, but no one likes feeling jittery and having bad crashes later on from consumption of coffee. Most teas are decaf, but the rest have about 50 percent of the amount of caffeine that’s in coffee. That means none of the jittery side effects that wreak havoc on your nervous system.

Not only does tea sound relaxing to drink, it actually makes you feel it too. Drinking tea decreases your cortisol levels, which are stress hormones that are known to contribute to belly fat and age your skin quicker. A 2006 study demonstrated that drinking tea for up to six weeks can bring your cortisol levels down, and even delay the aging process of your skin (one day counts as four cups of tea in the study).

Tea’s super hero, Green Tea, comes through again as a cholesterol reducer, shown in a meta-study in June 2011. The American Journal of Clinical Nutrition published that five cups of green tea show results in lower serum cholesterol and LDL. It says that the elements in green tea prevent cholesterol from being absorbed in the large intestine.

As spring comes along, it’s always good to have a backup defense to those pesky spring allergies. A 2007 Japanese study showed that the polyphenol found in tea can reduce pollen allergies in particular. The flavonol present in tea was also shown to decrease histamine.Pssst… if you add in honey, you get another immune system booster.

If you are prone to Winter Depression, then maybe you should think about picking up a cup or two of tea. A 2015 meta-study found that tea can lower the risk of depression, when participants drank three cups of tea per day, by 37 percent. Sprinkle in some self-care activities and mindfulness, and you have yourself a stress-free winter.What are personal benefits to tea that you have had? Comment below to tell us about them. Be sure to stay tuned for more winter posts from us.