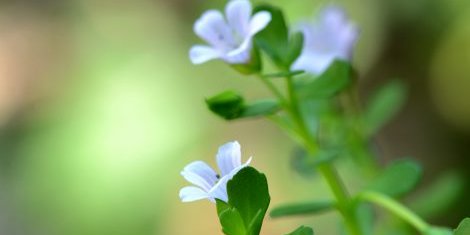 One of the most interesting is Bacopa monnieri, a perennial herb native to the wetlands in many places throughout the world, especially India, and also in the southwestern U.S. and China.

In Chinese Medicine, the herb, also known as bacopa, is taken to warm the kidneys, stimulate yang energy. It is also prescribed for kidney-related backaches, impotence, irregular menstruation and rheumatism.

Especially in traditional Indian medicine, it has been studied for having a beneficial effect on Alzheimer’s patients. It also has more extensive uses, particularly for the beneficial effects on Alzheimer’s patients, to enhance brain function and other forms of cognitive impairment. It also has been studied in the U.S. and India for its biochemical effects to enhance brain function. Alzheimer’s is a type of dementia that causes problems with memory, thinking and behavior. Symptoms usually develop slowly and get worse over time, becoming severe enough to interfere with daily tasks.

Bacopa might increase certain brain chemicals that are involved in thinking, learning and memory, studies show, depression, nervousness and stress. There also has been scientific research for its use in the treatment of Parkinson’s disease.  Bacopa also is linked to treatment as an anti-oxidant.

Bacopa monnieri (also known as brahmi, water hyssop, Bacopa monniera, and Herpestis monniera), is described as a creeping perennial succulent with small oblong leaves and purple flowers. The leaves of this perennial are small, thick and green and it has white flowers. Although it is seen throughout the world, it is native mostly in the warm wetlands of Australia and India, and as a weed in rice fields.

The herb thrives in well-watered areas, ranging from aquariums to small pots. The entire plant can be used for medicinal purposes, although it can be eaten in a salad.

Bacopa is full of antioxidants and contains several biochemical compounds that enhance the function of neurotransmitters in the brain. Studies have examined its impact and possible ability of removing amyloid fibrils, which is considered one of the major causes of Alzheimer’s disease. Amyloids are aggregates of proteins that become folded into a shape that allows copies of protein to stick together, forming fibrils, which disrupts healthy tissues.

Several studies indicate that bacopa may help preserve memory and enhance cognitive function. In a study published in the Journal of Ethnopharmacology in 2014,

researchers analyzed nine other academic papers examining the effect of bacopa on cognitive abilities. Its conclusion found that bacopa “has potential to improve cognition, particularly the space of attention, but further studies are needed for its effect on dementia patients.” Brahmi is taken for the treatment of epilepsy. It is also used in the treatment of asthma, ulcers, tumors, indigestion, inflammations and anemia.

There is some evidence to suggest in another  study that Bacopa may improve memory and there was also some “positive mood effects” and works to reduce cortisol levels, the physiological mechanism for stress reduction.  The research noted that studies are still in their infancy related to bacopa and those cognitive impacts.

There have been reports ?of cigarette smokers appearing to have an increased risk of dementia. Ironically, although bacopa contains some nicotine itself, it protects against some negative nicotine impacts, in mouse studies.

Chinese Herbs. Brahmi: for Rest and Mental Alertness. Retrieved from:

The Alzheimer’s Organization.  Vitamins for Alzheimer’s and Dementia. 2018. https://www.alzheimersorganization.org/vitamins?gclid=EAIaIQobChMIteae15bu3QIVzMjACh2dygKjEAEYAyAAEgIKNPD_BwE