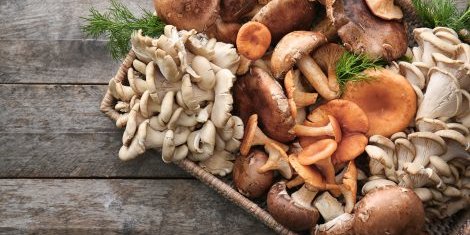 It may sound weird, but mushrooms are more closely related to humans than they are to the plant kingdom. Even stranger, animals and fungi shared a common ancestor. Scientists believe that over a billion years ago humans and fungi diverted on the evolutionary path from a single-celled organism. Maybe that explains why a grilled Portobello mushroom seems so meaty….

Another exciting aspect of mushrooms is that they contain vitamin D. Plants that grow in the sunlight do not have vitamin D, but a fungus that grows in the dark has the “sun vitamin.” Mushrooms are in fact just one of a handful of foods that contain naturally occurring vitamin D.

Fungi are organism unto themselves; they are neither plant nor animal. Aside from their unique classification, mushrooms are showing some spectacular health properties, and Western Medicine is taking notice. Andrew Weil, M.D. says mushrooms have a void to fill in western pharmacology because of their very rare chemistries: they have molecules that are not found elsewhere in nature. And their niche is filling health gaps where western pharmacology is lacking, such as enhancing the immune system.

Asian and other Eastern cultures embrace mushrooms for both their medicinal and culinary traits unlike the West. Many people are only familiar with the white button mushrooms used to adorn pizza or sautéed as a steak accompaniment. However, this is beginning to change as different mushrooms are introduced to the American public and as research shows how mushrooms can be an essential part of a healthy diet.

There are over 140,000 mushroom species. With only 10 percent of these fungi having been studied, the medicinal benefits of mushrooms are in its infancy. Here are a few examples of some of the more researched mushrooms and their benefits.

Reishi mushrooms have a very long history in TCM. Lingzhi mushrooms show great promise in treating some cancers. Ganoderic acid found in them is being used to treat lung cancer and leukemia. Reishi mushrooms are also used to alleviate the side effects of chemotherapy. The other medicinal benefits of Lingzhi fungi are improved stamina and immune response. They also boost immunity, combat bacteria and viruses, act as an anti-inflammatory, and help regulate cholesterol. In men, Reishi mushrooms are said to reduce prostate-related urinary symptoms.

Shitake mushrooms are familiar to culinary enthusiasts as a delicious ingredient for many dishes. Shitakes also have medicinal purposes. Two of the plant compounds found in shitake are glucan and lentinan. Specific compounds in glucan are thought to improve immune functions. Lentinan, a polysaccharide, has anti-tumor properties with good cancer survival rates. Lentinan is used to treat stomach cancer and other stomach illnesses, such as gallstones, gastritis, and ulcers. Shitakes are also antiviral, cholesterol-lowering, act as a blood sugar stabilizer, and have antibacterial properties.

Turkey tail mushrooms also have a long history in TCM for medicinal uses. They are also one of the most researched medicinal mushrooms. An NIH-funded study reported that daily doses of mycelium found in turkey tail mushrooms improved immune function in women with breast cancer. Research also showed mycelium enhances chemotherapy effects and reduces radiation side effects. Turkey Tail mushrooms are said to help with chronic fatigue, Candida, E.coli, and Streptococcus pneumonia.

Athletes have a fondness for cordyceps because they are believed to build strength, improve endurance, and have anti-aging effects. Cordyceps are used extensively as an anti-cancer tonic in TCM. Plant chemicals in Chinese caterpillar fungus increase virus and cancer-fighting T cells, have anti-tumor properties and increase the longevity of white blood cells. The caterpillar mushroom also helps fight infections and protects the liver and kidneys. Research also suggests they have potent anti-inflammatory properties.

In the U.S., Himematsutakes are also known as the almond Portobello because of their almond-extract flavor. Popular in Japan, himematsutakes are being studied for their anticancer and anti-tumor properties. These mushrooms also enhance the immune system. They are also seen to help with diabetes, hair, skin, and to normalize cholesterol.

Maitake mushrooms are very are popular in Japanese cuisine. They are also used in both China and Japan for medicinal purposes. Cloud mushrooms have antioxidant and anti-inflammatory properties. These mushrooms protect cells from COX2 enzymes found in cancer cells and boost the immune system. It’s also believed Maitakes may inhibit cancer cells from metastasizing.

Black Tree fungus is used medicinally in Eastern European countries. The fungus grows in northern, cold climates, such as Alaska, Northern Canada, and Siberia on birch trees. Technically speaking, experts aren’t sure if Chaga is a mushroom or a kind of fungus.  Research on Chagas shows promise because one of its compounds, Betulinic acid, may promote the death of cancer cells in skin, brain, ovarian, head, and neck cancers.

Black Tree fungus is also said to, aid digestion, improve immune function, and regulate blood pressure. These mushrooms are considered to be antiviral, antibacterial, and anti-inflammatory. They’re also used to detoxify the body.

Lion’s Mane mushrooms are being studied for their potential to regenerate nerve cells. Research suggests plant chemicals in the mushrooms can also repair damaged brain cells, which is promising for those with Alzheimer’s and Parkinson’s disease. Research also shows compounds in lion’s mane can increase healthy cholesterol (HDL) and prevent bad cholesterol (LDL) from rising. The mushrooms are believed to help with digestion, gastric ulcers, and inflammatory bowel disease. Research also shows lion’s mane mushrooms may help reduce inflammation and prevent certain  cancers from metastasizing or spreading to a different part of the body.

Banned since the 1960s in the U.S and many European countries out of fear of the 60s counterculture, the 200 species of the psilocybin-containing mushrooms are once again being studied by top research organizations for their medicinal benefits. New York University, UCLA, London’s Imperial College, Johns Hopkins, and the University of Zurich are studying the effects of psilocybin for addictions, PTSD, headaches, OCD, depression, and anxiety. Johns Hopkins lead psilocybin researcher, Roland Griffiths, Ph, D has said this about the current research on psilocybin, “‘It’s a Rip Van Winkle effect–after three decades of no research, we’re rubbing the sleep from our eyes.’”[ii] Some research has shown as little as a single dose can be useful.

This article is just a smidgen of the various mushrooms and their medicinal benefits. Also, they are essential to humans beyond being a superfood and their contributions to human health. Mushrooms are vital to the eco-health of the planet and everything that lives on it. If you want to learn more about the power of mushrooms, check out award-winning filmmaker, Louie Schwartzberg’s new film Fantastic Fungi that explores the magnificence of mushrooms. Here’s a link to the trailer, fantasticfungi.com.

Mercola, Dr. The Health Benefits of Mushroom Consumption (May 13, 2013). Retrieved from https://articles.mercola.com/sites/articles/archive/2013/05/13/mushroom-benefits.aspx.

Staughton, John. How Are Mushrooms More Similar to Humans than Plants? Retrieved from https://www.scienceabc.com/nature/how-are-mushrooms-more-similar-to-humans-than-plants.html.

Stevens, William. Rearranging the Branches on a New Tree of Life. Retrieved from http://ucjeps.berkeley.edu/DeepGreen/NYTimes.html