3 Simple Ways To Beat The Winter Blues And Seasonal Sadness 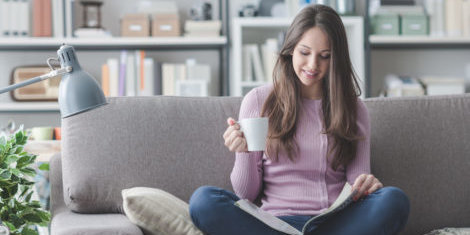 Winter in the U.S. brings long dark nights and in many areas of the country short, overcast days. Cold and ice prevent many from getting outdoors for fresh air. These factors combined with the stress of the holidays and the notable absence of loved ones can bring on the winter blues.

For some, the reduced daylight leads to SAD, or seasonal affective disorder. This clinical condition comes as the seasons transition to shorter, winter days. It can be serious and should be take seriously.

Fortunately, studies have identified a major cause for SAD and simple ways individuals can lessen its impact. Even better, they also help improve the mood of someone suffering from the winter blues too.

In 2014 researchers confirmed why some people suffer from SAD while others don’t. Their bodies regulate serotonin, a neurotransmitter associated with mood, differently from those who don’t experience seasonal sadness. Individuals who suffer from SAD have lower levels of active serotonin during winter months due to increased levels of a protein known as SERT which removes serotonin from neural synapses and puts it back in nerve cells.

Why does this happen specifically in winter months? Sunlight regulates SERT levels in the body. Researchers have measured serotonin levels in individuals and found levels are higher in everyone during the summer. Serotonin levels also increase when exposed to sunlight.

If you needed a great reason to escape the winter months for sunnier destinations like Florida, Southern California or even to take that long-desired Caribbean cruise, you have it. Of course, if that doesn’t work, there are three simple ways to boost serotonin levels and lift the mood during the winter.

Serotonin levels are directly related to sun exposure, so get out and get some sun. Admittedly, this can be difficult in bitter cold or snowy weather. But it’s also the easiest and least costly route to go. Make it a mantra in the winter, when the sun shines, go for a walk.

Alternatively, sit by a window that gets direct sunlight. Whatever you do, make it a point to spend as much time enjoying the sun’s golden rays.

Studies suggest one hour of exercise done outside is better than two and a half hours spent in the sun. Other research has reported exercise boosts serotonin levels and may be an effective way to beat mild to moderate depression for some.  This makes an extended walk a great way to lift the mood and get important exercise.

And it doesn’t need to be high-intensity exercise either according to a University of Connecticut study. An evaluation of 419 healthy adults found even light exercise improved overall feelings of well-being and were related to a better mood.

You can help your body produce more serotonin during winter months. Tryptophan, the amino acid in turkey popular for making guests sleepy on Thanksgiving, is a precursor for serotonin. Research has confirmed low tryptophan levels have been linked to depressed moods and poor memory. Adding it to your diet during winter months could help boost your natural levels of this important neurotransmitter.

Don’t Let Winter Get You Down

Sunlight, exercise and diet are simple and effective ways to boost your mood during winter months. Plus, they’re cost effective. If, however, you find yourself depressed where they don’t help, seek the guidance of a doctor. They’ll be glad to listen and help.